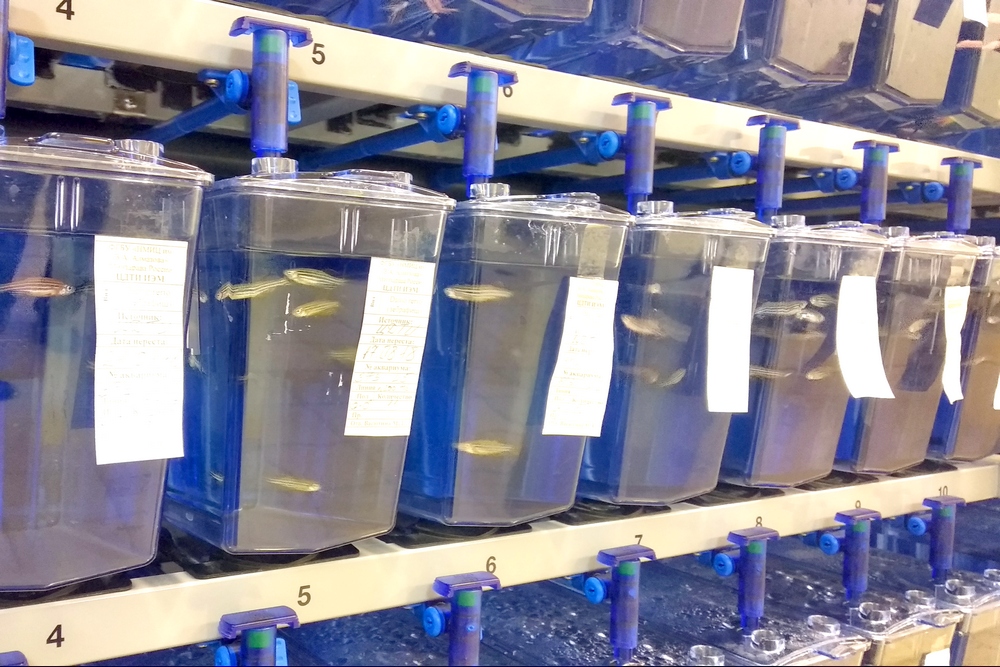 The Research Group of Neurobiology at the Experimental Medicine Institute (Prof. A.V. Kaluev, Junior Researcher K. A. Demin) in collaboration with the biologists from the Ural Federal University, St. Petersburg State University and colleagues from Moscow, Novosibirsk, Brazil and China developed a unique method that allows the testing of antidepressants with the zebrafish Danio rerio (small aquarium fish). The zebrafish (Danio rerio) is used extensively for toxicological, pharmacological, genetic and neurobiological studies. Its small size and high fecundity make it possible to speed up and reduce the time and cost of research.

The Preclinical Translational Research Centre of Almazov Centre has a state-of-the-art aquatic vivarium. It is one of the few in Russia that allows such innovative experiments.

In the test developed by the scientists, the fish are fixed in a special sponge material (providing soft retention), and their activity in the tank is observed for five minutes. It has been suggested that fish have a state of “despair” (forced helplessness) manifested by increased immobility (freezing). Note that despair is a clinical sign of depression, and therefore this research suggests an important translational potential. To test the proposed model, the authors used the classical antidepressants (amitriptyline and sertraline), electric shock (pain), anxiety pheromone (stress) and an anti-anxiety drug without antidepressant effect (phenazepam). It was shown that amitriptyline and sertraline significantly increased the activity of fish in this test, while stressful effects (electric current and fear) naturally reduced it. At the same time, phenazepam had no effect, suggesting that this test can be used to distinguish antidepressants from anti-anxiety drugs, unlike many other tests where the behavior caused by antidepressants and anti-anxiety drugs without an antidepressant effect is the same, making it difficult to discern.

Schematic movements of zebrafish in the tail suspension test

It was shown that zebrafish, like rodents and humans, can feel despair and the use of antidepressants can change this behavior, thus indicating a high behavioral similarity in evolutionarily very distant species. The phenomenon of despair can manifest itself in a wide group of vertebrates and therefore can be studied by looking for the most similar molecular and physiological reactions associated with despair in fish, rodents and humans. Moreover, the simplicity of the fish’s body makes it possible to test many substances on them much faster than on rodents. Further, substances that have been shown to be effective in zebrafish and rodents at the same time are highly likely to be effective in humans because the same efficacy in such distant organisms will indicate that the drug has an effect on the most common and functionally important part of the target for regulating behavior.

The article with the findings of the study was published in the Journal of Neuroscience Methods in May 2020. The project was supported by a grant from the Russian Foundation for Basic Research “Search, description and detailed study of the depressive phenotype in Danio rerio”.