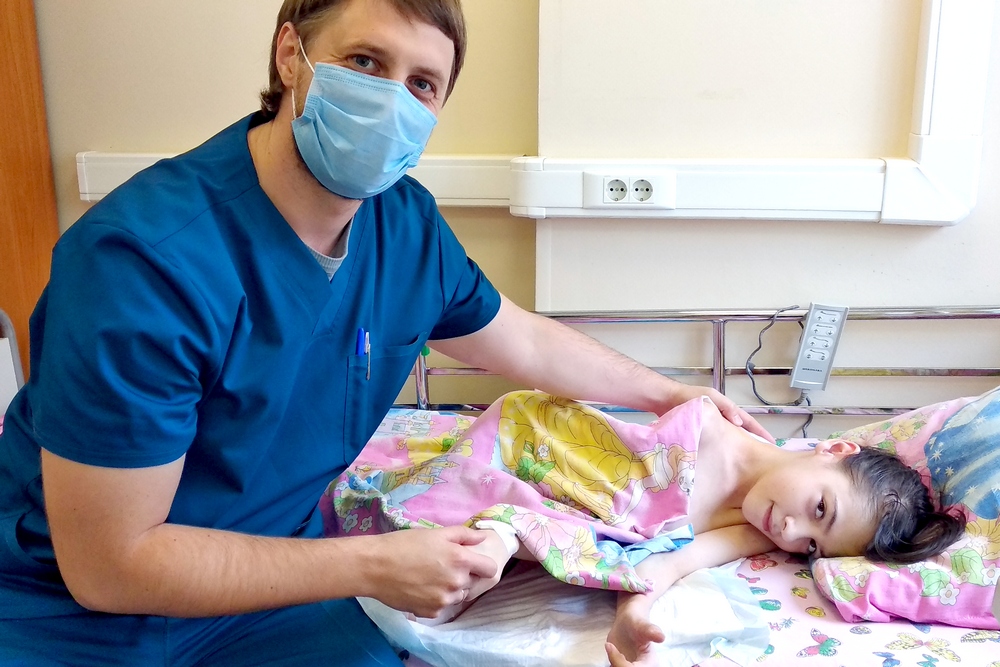 The child was diagnosed with cerebral palsy from birth. Despite this, the girl was developing, walked with a walker, studied and used a tablet. During all these years she received treatment: corrective staged repairs on legs, rehabilitation and developmental treatment. However, in 2019, when she turned 13, her condition deteriorated rapidly. Spinal deformity grew worse, the child developed severe back pain, almost lost movements in her legs and arms and was confined to bed. The parents got alarmed. Neurologists at the place of residence prescribed various painkillers and spasticity-relieving drugs, which did not help.

Almost a year later, in 2020, doctors performed the first MRI scan for the patient. The scan unexpectedly showed a mass, a spinal cord tumor occupying nearly the entire thoracic section (half of the spinal cord).

The patient was admitted to Almazov Centre in a severe condition, maintaining the forced position of the body (she could only lie on her left side), with only very weak movements in the left hand and a pronounced pain syndrome.

Doctors of Almazov Centre performed an urgent complex surgery on the child. Only having opened almost half of the spinal canal at the level of the spinal cord, neurosurgeons were able to completely remove the tumor.

“In the future, the girl will still have to undergo treatment for scoliosis. And in this case, we can say that her scoliosis is neurogenic, it is caused by the tumor. The mass strongly compressed the spinal cord, worsening the patient’s condition every day,” notes the head of Pediatric Neurosurgery Department Alexander Kim.

The doctors noted positive dynamics in the patient’s condition immediately after the surgery, hand movements appeared more confident, sensitivity in the legs improved, and the pain disappeared.

The histological analysis showed that the tumor was benign. The final diagnosis is pilocytic astrocytoma.

Now the little patient will be followed up by doctors, undergo the next stages of treatment and rehabilitation. She will have to learn to walk again, move her arms and live without pain.