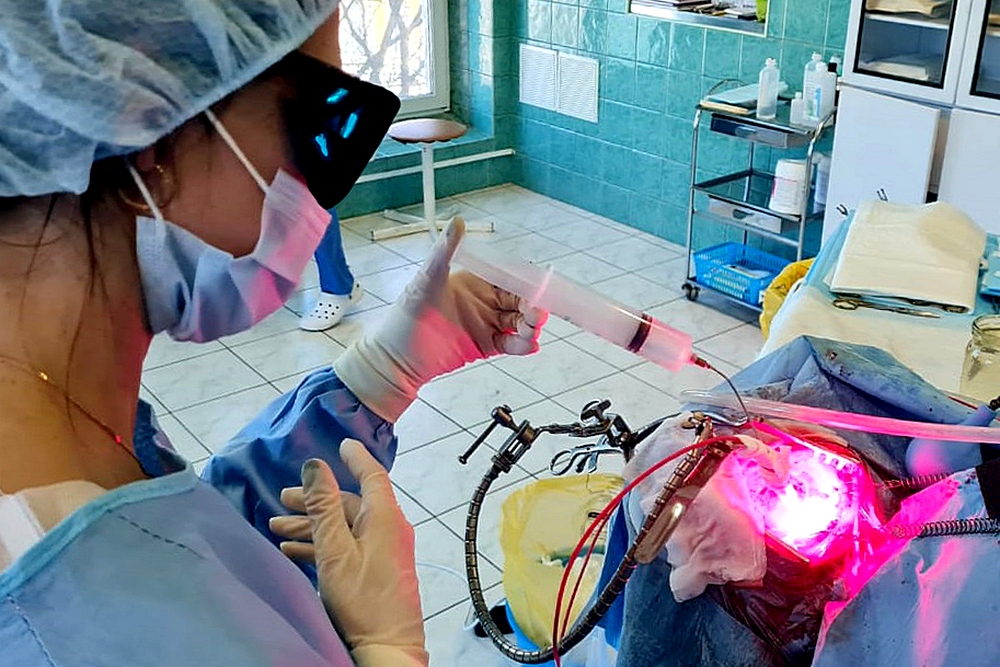 A 34-year-old patient was admitted to neurosurgery department No. 4 of Polenov Neurosurgical Institute (branch of Almazov Center) with complaints of headache, nausea and repeated vomiting. Examination revealed the recurrence of esophageal cancer metastasis to the right cerebellar hemisphere. The patient had previously undergone a course of radiation therapy and several courses of polychemotherapy. The team of doctors had a meeting with the faculty of the Neurosurgery Department and decided to perform microneurosurgical removal of the tumour in combination with photodynamic therapy – a modern technique to increase surgical radicality.

Photodynamic therapy (PDT) is a minimally-invasive surgical tool successfully targeting premalignant and malignant disorders. It is a two-stage procedure that combines light energy with a drug (photosensitizer) designed to destroy cancerous and precancerous cells after light activation. The method is based on selective accumulation of photosensitizer in the tumour tissue. Photosensitizers are activated by a specific wavelength of light energy from a laser. The photosensitizer molecules absorb the light of the appropriate wavelength, initiating the activation processes leading to the destruction of the inappropriate cells. This is important when cells spread in the brain matter away from the tumour node.

A neurosurgical microscope with integrated fluorescence module was used during surgery. The image obtained using microscopy makes it possible to distinguish tumour cells from normal ones, to assess surgical radicality and the effectiveness of photodynamic therapy.

This approach made it possible to completely remove tumour cells not only in the surgical site but also in the adjacent brain structures, which will contribute to a longer recurrence-free period and better quality of life. The postoperative period was uneventful. Follow-up MRI confirmed the complete removal of the malignant brain tumour. The patient was discharged in satisfactory condition without neurological deficits.