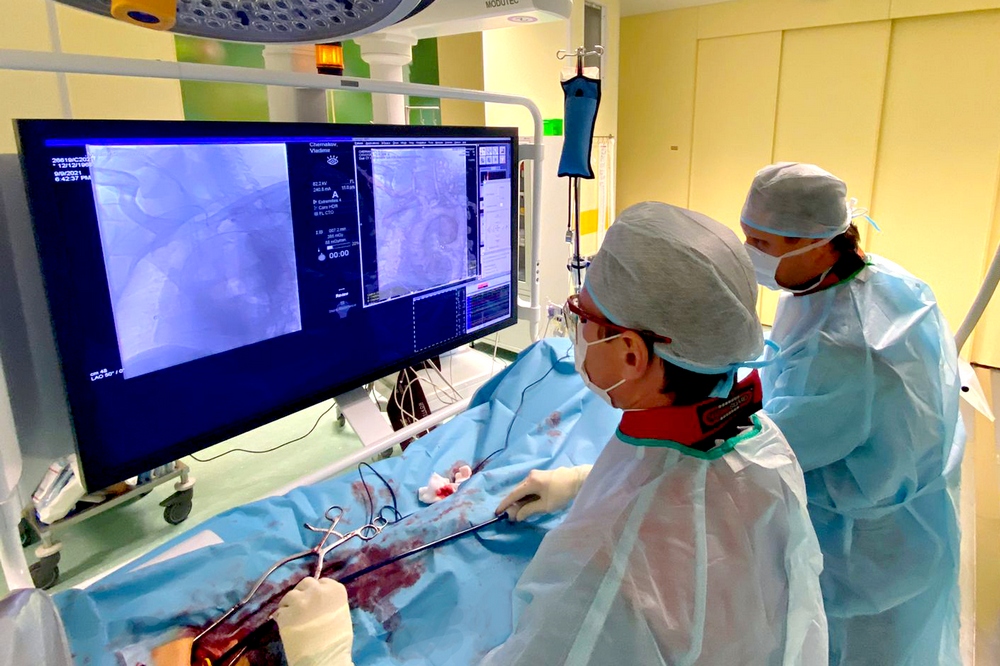 A 52-year-old man is now undergoing a recovery after surgery in the Cardiovascular Surgery Department, and just a few days ago he was hanging by a thread. On September 9, vascular surgeons performed a life-saving endovascular repair of the aortic arch to prevent the rupture of the giant aneurysm.

Two months ago, the man jumped into the water to rescue a drowning woman and after a few hours he experienced shortness of breath, cough and hoarseness. A thorough examination revealed two large saccular aneurysms of the thoracic aorta measuring up to 8 and 5 cm at the areas of anastomosis and compressing the left branch of the pulmonary artery. The impact of jumping into the water probably provoked the rapid growth of the aneurysms leading to the development of these symptoms.

At the age of 9, the patient was found to have a congenital defect – coarctation of the aorta. At that time, endovascular treatment methods were just beginning to emerge and in order to treat this condition, the patient underwent an open surgery, the resection of the narrowed portion of the aorta with its repair.

On September 8, the patient was admitted to Almazov Centre for endovascular aortic arch repair. During the day, the patient's condition deteriorated rapidly, he had permanent chest pain radiating to the interscapular region. Urgent MSCT aortography revealed that the aneurysm rapidly increased in size up to 10 cm and caused pronounced compression of the pulmonary artery.

Given the threat of rupture, the man was urgently taken to the OR where he underwent endovascular surgery – implantation of a stent graft into the arch and thoracic aorta.

“In order to accurately position the stent when it is released from the delivery system, anesthesiologists perform high-frequency stimulation of the right ventricle, which temporarily reduces cardiac output and allows for implantation with millimeter precision. The navigation system makes it possible to implant a stent-graft without the use of a contrast agent, based on the patient's CT,” explains Chief of the Research Department of Vascular and Interventional Surgery, Dr. Mikhail Chernyavsky.

Without urgent surgery the patient could have died due to aneurysm rupture. Traditional open surgery in this case was extremely risky due to the possibility of uncontrolled intraoperative bleeding in case of rupture of a large aneurysmal sac. The situation was aggravated by the distorted anatomy of the aorta and cicatricial changes in the surrounding tissues after the surgery performed in childhood.

The next day after the surgery, the patient in a stable condition was transferred from the ICU to the normal ward. He will be further followed up by doctors and undergo the next stages of inpatient treatment and rehabilitation.