On November 2, doctors at Almazov Centre performed a combined epicardial/subcutaneous implantation of a single-chamber implantable cardioverter defibrillator (ICD). A team of arrhythmologists (headed by Prof. Dmitry Lebedev), surgeons and electrophysiologists successfully operated on a two-year-old girl with a rare inherited myocardial disease leading to sudden cardiac death in early childhood.

Timothy syndrome (TS) is a genetic disorder characterized by long QT syndrome type 8 and other phenotypic abnormalities (syndactyly). The severity of this condition is often life-threatening due to the heart problems. TS has an extremely bad prognosis. Ten out of 17 children analyzed in an observational study died at the age of about 2.5 years.

While receiving the indicated drug therapy (Nadolol) in October, the girl had a syncope complicated by a closed traumatic brain injury. She was urgently delivered to Almazov Centre to determine further management tactics. Taking into account the diagnosis, history of syncope, high risk of sudden cardiac death, the team of doctors from the Research Department of Cardiovascular Diseases in Children with Pediatric Cardiac Surgery and the Arrhythmology Research Department determined the indications for implantation of a cardioverter-defibrillator. 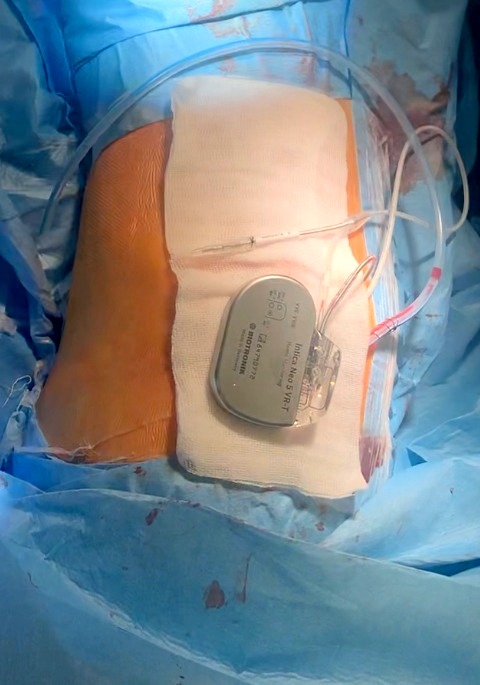 The surgery was complicated by the low weight of the patient (10.5 kg), the need for correct detection of cardiac events and effective treatment of life-threatening arrhythmias. To perform all this under general anesthesia, the body of the device was placed in the area on the abdominal wall, and electrodes for cardiac events were sewn to the myocardium from the epicardial side. The main issue was the location of the defibrillation electrode: it was decided to tunnel in the subcutaneous fat and position it on the posterolateral surface of the chest. Given the atypical location of the cardioverter-defibrillator body and defibrillation electrode, a defibrillation test was done intraoperatively.

To date, the little patient is in a satisfactory condition and is preparing to be discharged. In the future, she will require follow up and examination at Almazov Centre.

The complex surgical procedure was performed with the participation of the Chief of the Department of Surgical Treatment of Complex Arrhythmias and Cardiac Pacing of the Moscow Research Institute of Pediatrics and Pediatric Surgery Sergei Termosesov, pediatric cardiac surgeons of Almazov Centre E. Grekhova, A. Ivanova, I. Kozyreva, as well as pediatric cardiologists E. Vasichkina, K. Chueva, T. Kovalchuk, T. Pervunina.