Myxoma is a benign tumor of the heart. Cardiac myxoma is a rather rare disease; it accounts for 0.5% to 1.5% of all cardiac conditions. With the current level of diagnosis and treatment, as a rule, the size of myxoma does not exceed 2 × 4 cm.
A 75-year-old patient who was referred to a cardiologist at Almazov Centre had already been diagnosed with myxoma and complained of shortness of breath, weakness and extreme fatigue. Cardiac ultrasound revealed a tumor measuring 9 × 6 cm.
“We were amazed by its size. Usually, myxoma sizes are much smaller, but since it was encapsulated, the patient had no embolic complications for such a long time,” comments Olga Khatnyuk, a cardiologist at the Cardiovascular Surgery Department. 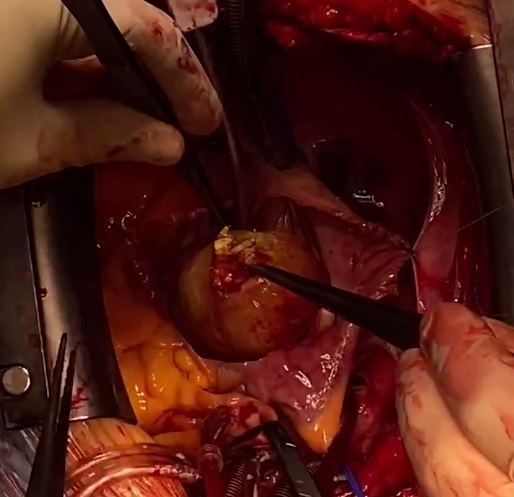 The patient's symptoms were similar to valvular disease – mitral valve stenosis: since the tumor periodically occluded (partially blocked) the mitral valve, the blood flow from the left atrium to the left ventricle decreased. The patient was hospitalized right after the appointment. The doctors arranged for an urgent surgery.

“Of course, there were special considerations before the main stage of surgery, and the patient's condition was close to critical. Such patients are extremely unstable hemodynamically, and after the onset of anesthesia, as a rule, there are problems with systemic hemodynamics. We had to speed up with turning on the bypass, and the total surgery time was 2.5 hours. During this time, we managed not only to remove a huge tumor located in the left atrium but also to repair two valves without replacing them,” explains the operating surgeon, Head of Cardiovascular Surgery Department Vadim Grebennik.
Currently, the patient feels well and is undergoing rehabilitation therapy at the Almazov Centre’s Rehabilitation Clinic.