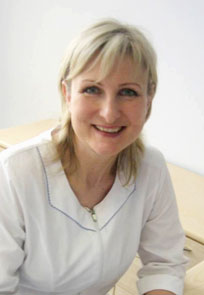 Head of the Research Laboratory of Children’s Diseases Diagnostics and Treatment, MD

In 2000, she graduated from Saint Petersburg State Pediatric Medical Academy. From 2000 to 2001 she held a clinical internship and later (2001—2003) residency at the Department of propedeutics of childhood diseases with a course of general child care in “Pediatrics”.

From 2003 to 2004 she worked as a senior laboratory assistant, and later up to 2010 as an assistant at the same department and hold the theoretical and practical classes on “Childhood diseases propedeutics” and “Healthy and sick child care” based on “Children's Hospital”. Since 2007, I. Leonova is a reviewer of the Leningrad Regional Children's Pediatrician Anatomic-Pathological Bureau.

She is the author of more than 40 publications, co-author of the textbook “Childhood diseases propedeutics” and 1 computer program.