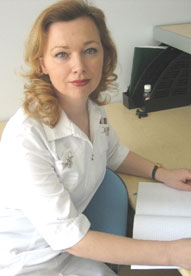 Senior Researcher of the Research Laboratory of Children’s Diseases Diagnostics and Treatment, MD

In 1996, she graduated from St. Petersburg State Pediatric Medical Academy in “Pediatrics”. From 1996 to 1998 she studied in clinical internship at the Department of Pediatrics. Later she continued the education in graduate school.

From 2001 to 2010 she worked as an assistant at the Department of Childhood diseases propedeutics of Saint Petersburg State Pediatric Medical Academy. She treated pediatric patients at the Somatic department and counseled as an endocrinologist at the Department of pathology and neonatal resuscitation. Since 2010 she has been working as a pediatric endocrinologist at the Federal Almazov Medical Research Centre.

In 2002 Elena Gurkina defended her thesis on “The course of prepubertal and pubertal stage in girls with congenital adrenal hyperplasia” in the field of “Pediatrics” and “Endocrinology”. Since 2011 she became a senior researcher at the Research Laboratory of Children’s Diseases Diagnostics and Treatment.

Her scientific interests include issues of perinatal endocrinology, influence of endocrinopathies on fetal development, metabolic syndrome in children, iodine deficiency state, hyperandrogenism, and other issues of pediatric endocrinology.

Elena Gurkina is the author of more than 30 publications, including a chapter in the manual for physicians “Pediatric and Adolescent Gynecology” (2010), co-author of the textbook “Childhood diseases propedeutics” and the computer program “Automated evaluation of anthropometric child indices”. She is the initiator and leader of the School for pregnant women at the Perinatal Centre.