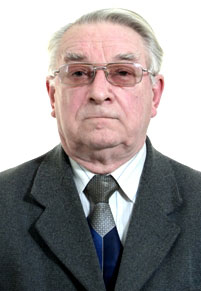 Leading researcher of the Research Laboratory of Children’s Diseases Diagnostics and Treatment, a pediatrician of the highest category, MD, Professor.

In 1962 V. Yuriev graduated from Leningrad Pediatric Medical Institute. After that he worked as a pediatrician in Karelia. In 1964 he entered graduate school under the guidance of Professor A.B. Volovik, in 1967 he defended his thesis on “Characterization of immunological parameters with modern methods of treatment for children with rheumatic fever”.

Research interests of Professor Vladimir Yuriev are quite diverse: for many years he was involved in the problems of child cardiorheumatology. In 1980 he defended his doctoral thesis on “Rheumatic fever diagnosis and prognosis in children (clinical and immunological research)”. For more than 15 years V. Yuriev was the Chief Child Cardiorheumatologist of Leningrad and Leningrad region.

In recent years Vladimir Yuriev’s main research directions were related to the study of children's health and its determining factors, including medical, social and environmental aspects. Under the guidance and participation of Professor Yuriev the system of screening diagnostics “Sanus” was developed and put into practice. Over the years the program “Sanus” operation the expert analysis of children health status in more than 25 regions of the country was made.

The results of this scientific research under the guidance of Vladimir Yuriev were used during the nationwide medical examination of child population in 2002 in the Leningrad region. In recent years the system of screening diagnostics was supplemented with the program assessing the impact of external factors on a child health, including clinical, laboratory and functional tests. After the research a series of guidelines for the assessment of physical development and anthropometric status of a child was published, passports assessing the physical and psychomotor development of children were introduced (“The growth and development of a child”, 2007; “Direct examination of a child”, 2008, etc).

In 1996 V. Yuriev was elected the Member of the International Academy of Ecology and Life Safety, and in 1998- the member of the National Academy of Uvenology (Youth Studies). Since 2010 he is a Leading researcher of the Research Laboratory of Children’s Diseases Diagnostics and Treatment of the Institute of Perinatology and Pediatrics of Federal Almazov Medical Research Centre.

Vladimir Yuriev is the author of 225 scientific papers, 41 of which are the monographs and chapters in monographs, 12 rationalization proposals, 3 patents. Under his supervision 31 PhD and 5 doctoral theses were defended.