The Almazov National Medical Research Centre has agreements of scientific cooperation with 25 universities and research institutions in various fields, 10 of them include academic exchanges.

27 scientific events with international participation were held in 2016; 26 talks presented at international congresses at the world and European level. Specialists of the Almazov Centre made oral and poster presentations, were chairmen of scientific symposia at international congresses and conferences including the ESC Congress 2016 in Rome, Italy, the annual scientific session of the American College of Cardiology Chicago (USA), the annual scientific session of the American Heart Association (AHA) in New Orleans (USA) and many others. General Director of the Center Evgeny Shlyakhto gave a talk at the 9th World Health Organization conference «Health for All and All for Health» in Shanghai, China.

The most significant events at the Almazov National Medical Research Centre with participation of foreign specialists in 2016:

On February 4, 2016, the delegation of the Kauno Klinikos Hospital of the Lithuanian University of Health Sciences visited the Centre. As a result of the discussion, an agreement on cooperation between the Almazov National Centre and Kauno Klinikos was signed.

On February 17, 2016 symposium “Vitamin D and its Importance for Human Health” with the participation of Professor Pawel Pludowski, President of the European Association of Vitamin D, was held. The symposium included the talks of the leading specialists of St. Petersburg on the prevalence, prevention, diagnosis and treatment of vitamin D deficiency.

On February 25-26, the Symposium on the CVD epidemiology was held. Deputy Director for Research, Professor Alexandra Konradi, directors of the Almazov research institutes, laboratory heads and invited lecturers as well as Professor of Epidemiology from the London School of Hygiene and Tropical Medicine, David Leon, and Professor Gerry Christopher, Head of the International Center of Economy, Management and Policy of the Higher School of Economics in St. Petersburg took part in the event. 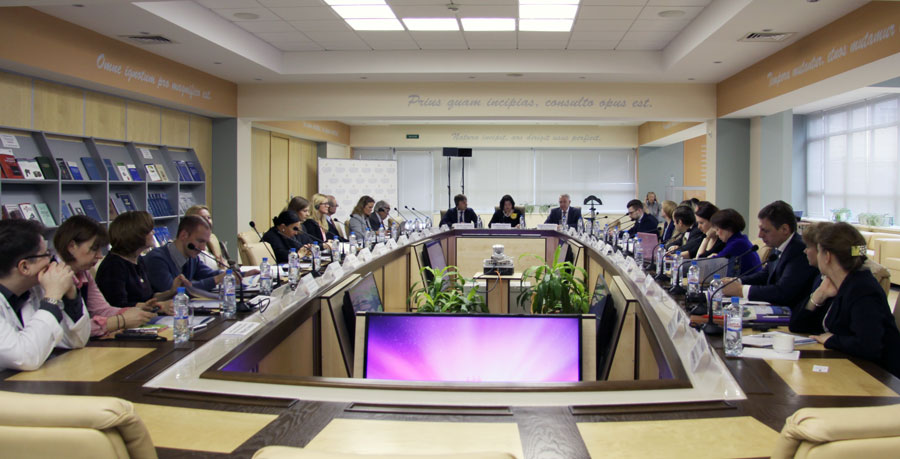 On March 26, the Russian-Chinese meeting on cooperation in the field of healthcare with participation of Professor Jianguang Xu, President of the Shanghai University of Traditional Chinese Medicine was held. Within the working meeting, scientific and clinical achievements of both institutions were presented, several proposals for future cooperation were developed.

On April 5, a visit of the Cuban delegation from the Genetic Modeling and Biotechnology Center to the Almazov National Medical Research Centre was organized. Within the visit, a meeting with the specialists of the Institute of Endocrinology, Institute of Experimental Medicine and Medical Scientific and Educational Cluster “Translational Medicine” was held. The colleagues from Cuba got acquainted with the areas of specialization and the most important achievements of the Almazov Center and discussed possible joint projects. 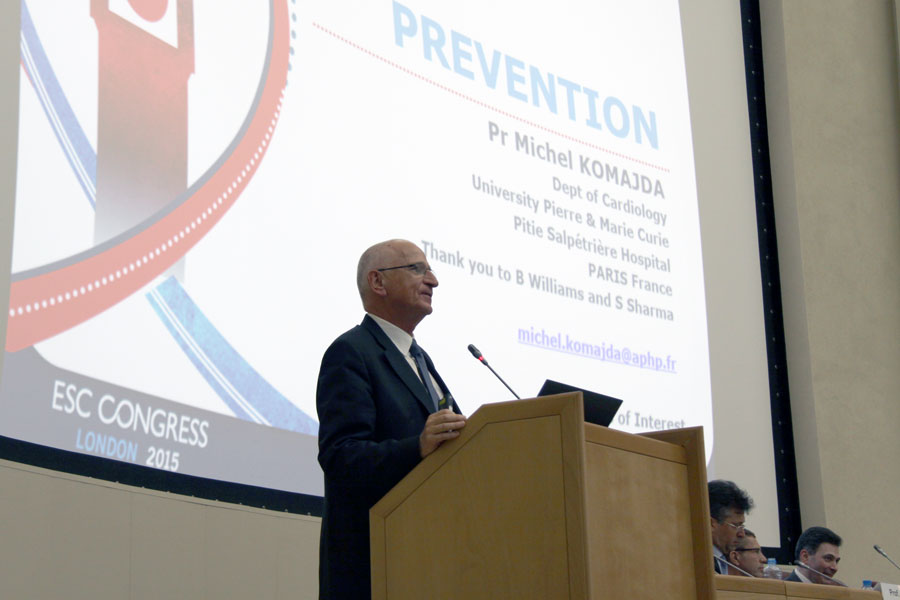 On April 21, the German-Russian seminar “CVDs and their treatment” was held in the framework of the traditional “Germany Week 2016” in St. Petersburg. Within the seminar, the problems of diagnosis and treatment of heart failure and acute coronary syndrome were discussed.

On April 21-23, the IV Global Education Forum “Russian Cardiovascular Days” was organized by the Russian Society of Cardiology. Leading experts of the European Society of Cardiology: ESC Past President Prof. Michel Komajda (France), ESC President Prof. Jeroen Bax (Netherlands), Chairman of ESC Committee for Practice Guidelines Prof. Stephan Windecker (Switzerland) and many others took part in the forum. The scientific program mostly covered the educational issues: the experts presented the latest clinical guidelines and in the fields of cardiomyopathies, cardiac arrhythmias, myocardial infarction and other CVDs. The forum was attended by the representatives of 17 countries and 38 regions of the Russian Federation: in total, about 1,000 delegates took part in the event. 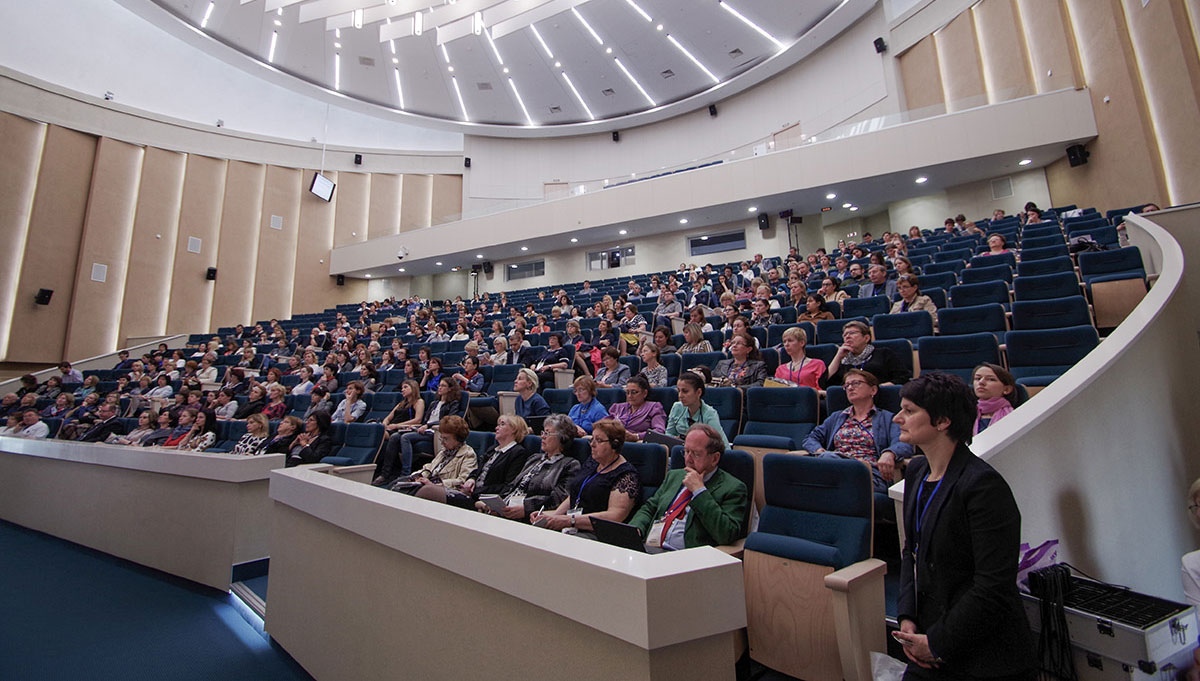 On May 26-28, the All-Russian Conference with international participation “Team approach in modern endocrinology” took place. Leading Russian and foreign lecturers from Sweden, Austria, Serbia, Belgium, Poland and other countries came to participate. The conference was attended by more than 600 participants from different cities of Russia. The well-known experts made the most interesting presentations at the Plenary session: the leading Austrian scientist, Director of the Rudolfstiftung Hospital in Vienna (Austria), Prof. Guntram Schernthaner: “Hypoglycemia and cardiovascular risks”. Prof. Vera Brkic from the Belgrade University (Serbia) gave a talk on the deficit of growth hormone in adults; and Kjell Oberg, Professor of Endocrine Oncology at the Faculty of Medicine, Uppsala University, Finland, presented on “Neuroendocrine tumors diagnostics and treatment”.

On June 23-24, the IX Interdisciplinary Conference on Obstetrics, Perinatology, Neonatology “Healthy Woman — Healthy Newborn” was held. For the first time in Russia, the seminar on the syndrome of congenital central hypoventilation and chronic ventilation in children at home was held with the participation of an expert from Great Britain, Dr. Martin Samuels. The leading specialist in Europe in treatment of children with the diaphragm stimulator Dr. Anders Jonzon from Sweden also shared his experience with the audience. In addition, a joint symposium with colleagues from Israel on obstetrics and perinatology topical issues was organized with Prof. Igal Wolman and Dr. Mikhail Brusilov from the University of Tel Aviv, Israel.

On July 4, a working meeting with Professor Stephan Bornstein from the Technical University of Dresden, Germany was organized. The possibilities of future joint work with the Institute of Molecular Biology and Genetics and cooperation in the field of education were discussed.

On September 29, a working meeting of the participants of ISCHEMIA clinical trial was held. Within the event Dr. Sripal Bangalore, one of the leading participants of the project, made a presentation and initiated a discussion on the tactics and future prospects of the study.

During the Scientific Session of the Medical Scientific and Educational Cluster “Translational Medicine” a number of events were held, including the 5th All-Russian School of Practical Arrhythmology, September 14-16, attended by Prof. Halina Dobrzynski from the UK with the lecture “Functional morphology of the cardiac conducting system”.

On October 7-8, the School for X-ray Diagnostics in Pediatrics and Perinatology was held. Organizers of the School were the Almazov National Medical Research Centre and Children's Hospital of Philadelphia. USA. 14 specialists from the USA, together with leading doctors of the Almazov Center discussed the imaging techniques in children, diagnostics of CV and lung diseases, methods of neuroimaging and fetal imaging.

On October 7-8, within the framework of the Scientific Session, the 3rd International Conference “Scientific and Technological Cooperation of Russia and the European Union. Current cooperation tools and prospects” was held, the participants discussed the issues of scientific research funding and supporting international cooperation. The presentations were made by the representatives of Bulgaria, Israel and Russia. 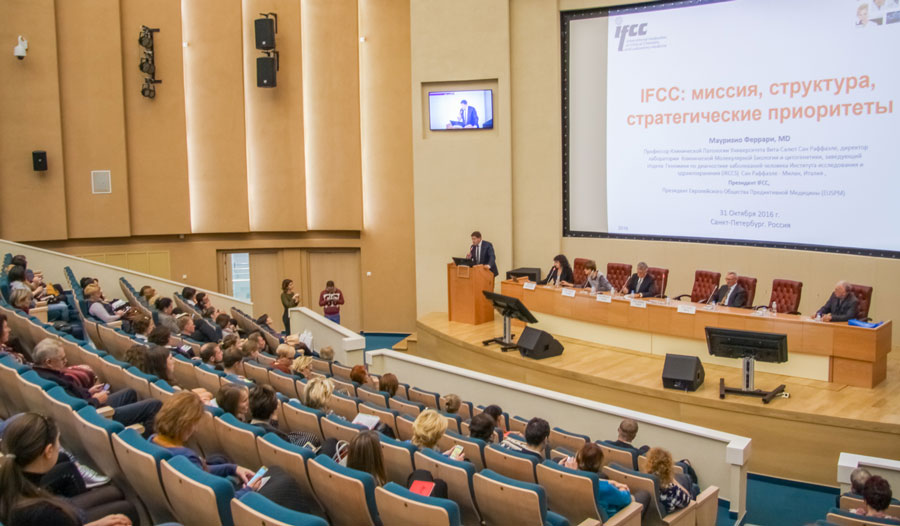 On October 31, the conference on the interaction of the International Federation of Clinical Chemistry and Laboratory Medicine (IFCC) with specialists in laboratory medicine of the Russian Federation was held. Within the conference, IFCC projects on development of laboratory medicine and interaction with national professional organizations were discussed. The main international guests of the conference were IFCC President Professor Maurizio Ferrari, Italy, and the toxicology expert from Great Britain, Dr. David Berry.

On December 20, the Russian-French master class on surgical treatment of congenital funnel-shaped deformation of the thorax was held. As an educational part of the event, on-line broadcasting from the operating room was organized with the following discussion of the surgery. The main speaker was Prof. Gilbert Massard, the leading thoracic surgeon and transplantologist at the Strasbourg University Hospital, France.