Joint SICA-HF project holds a special place in Almazov Federal Centre international collaboration as it runs together with partners from Europe and Russia within the FTP “R&D in priority fields of the S&T complex of Russia 2007–2012”. The project is funded by the EC under the 7th Framework Programme. The project theme is: “Study of Molecular Mechanisms of Cardiovascular Diseases Related to Diabetes and Overweight”.

Recently on 18 November 2011 a cooperation agreement in educational field was signed between Almazov Federal Center and the University of Iowa.

A number of new agreements with the University of Oslo (Norway) and Living Cell Technologies Ltd. are under development.

The most significant 2011 events with participations of foreign specialists are the following:

On 19 January 2011 seminar “The Main Preventative Measures of Hospital-Acquired Infections” with Prof. Wolfgang Merkens (Germany) participation was held in Almazov Federal Centre together with “Shulke & MayrGmbH”.

On 31 March 2011 Russian-Turkish symposium “Modern Approaches to Arterial Hypertension Treatment” with support of physician and cardiology group from research institutions in Turkey was held in Almazov Federal Centre. The main aim of the symposium was to acknowledge foreign colleagues with Almazov Centre capabilities and develop of international links in the field of arterial hypertension.

On 19-21 May 2011 in Saint-Petersburg in the context of the jubilee events dedicated to 80 anniversary of distinguished Russian cardiologist and physician Vladimir Almazov an “International Almazov Scientific Conference 2011” was held. Within the conference various aspects of current approaches to diagnosis, treatment and prevention of cardiovascular, endocrine and blood diseases were discussed. Special emphasis was given to cardiovascular diseases prevention. Academician of the Russian Academy of Medical Sciences, Society of Cardiology of the Russian Federation (SCRF) president Raphael Oganov and corresponding member of the Russian Academy of Medical Sciences, SCRF’s vice president and Almazov Centre director Evgeny V. Shlyakhto presented the reports on the stated issue. Conference theme proved to be of great importance among specialists worldwide. This was shown by the range of foreign specialists that came from countries like Sweden, Germany, Belgium, Netherlands, USA, Israel and Italy as well as more then 1500 Russian specialists took part the conference.

In the context of Russian-Turkish Symposium on 7 June 2011 on the basis of Almazov Federal Centre a master-class on “Insulin Talks” for the delegates from Turkey. Master-class was dedicated to insulinotherapy issues, main guidelines to diabetes mellitus treatment and prevention of cardiovascular risk diseases and diabetic foot. 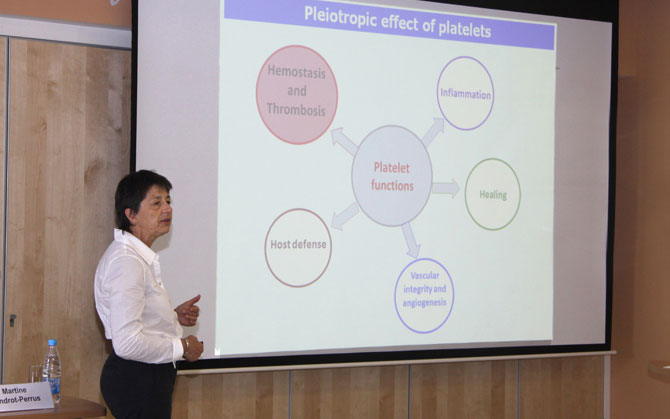 Prof. Martine Jandrot-Perrus on the a conference “Current Issues of Thrombosis and Hemostasis in Cardiovascular Pathology”

On 10 June 2011 in Almazov Federal Centre a conference “Current Issues of Thrombosis and Hemostasis in Cardiovascular Pathology” was held together with French National Institute of Health and Medical Research (Inserm). Prof. Jean-Baptiste Michel and Prof. Martine Jandrot-Perrus took part in the conference.

On 21-22 June 2011 an International Conference “Preterm Birth and Post-term Pregnancy” was held in Almazov Federal Centre. The conference was held under auspices of the World Association of Perinatal Medicine and European Association of Perinatal Medicine. Specialists from the USA (Roberto Romero), Italy (Gian Carlo DiRenzo) and Canada (Dan Farine) participated in the work of the conference. In the course of the conference various aspects of current approaches to premature birth management as well as role of different infections and inflammatory response in pathogenesis were discussed. Besides, issues of abnormal labor, assessment methods of fetal and newborn maturity, and even medicolegal issues in obstetrics were covered on the conference.

On 15-16 September 2011 3rd Russian Scientific Conference with International Participation “Noncoronary Heart Diseases: Diagnosis, Treatment and Prevention” was held in Almazov Federal Centre. Conference founders were the Society of Cardiology of the Russian Federation, North-West Department of Russian Academy of Medical Sciences and others. The conference focused on current modernization issues of high-tech medical care delivery to patients with noncoronary heart diseases, working out new technologies for diagnosis and treatment of primary and secondary cardiomyopathy, implementation of novel medical technologies. An international section with participation of Vice-President of the European Society of Cardiology Prof. A. Torbicki and member of Finnish Cardiac Society Prof. T. Helio played a key role. The conference enabled to review the current achievements and outline a way to further development of the medicine field.

Following the conference held on 15-16 September, on 6-7 October 2011 VI Interdisciplinary Conference on Obstetrics, Perinatology and Neonatology “Healthy Woman — Healthy Newborn” was held in Almazov Federal Centre. Traditionally, the conference brought together a wide range of specialists from other cities as well as foreign colleagues coming from Sweden (Miсhella Barbaro), Italy (Giovanni Monni), Portugal (Manuel Carrapato), Israel (Lina Basel), Netherlands (Gerard Visser), Ukraine (Denis Surkov) and Great Britain (Alan Cameron) came to take part in the conference. The event gathered more than 400 people.  Apart from the previous conferences this gave the conferees the chance not only to attend the sessions and exchange valuable experience, but also to get to know with the advanced equipment of Perinatal Centre as well as with simulation centre founded on its basis.
The conference joined the specialists from different countries, made possible to effectively exchange experience, gain new knowledge and foster further research in obstetrics, perinatology and neonatology. 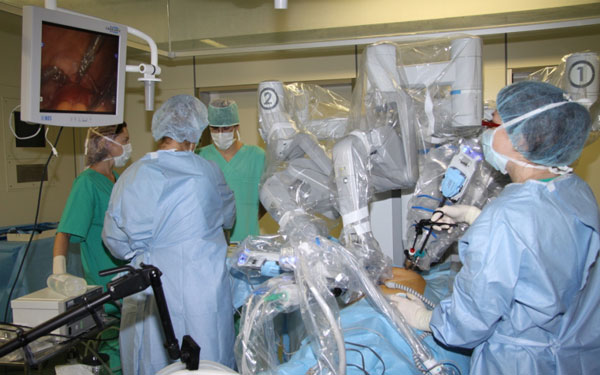 For the first time in Russia in Almazov Federal Centre in the context of the V International Scientific Congress “Operative Gynecology — New Technologies” and together with D. O. Ott Research Institute of Obstetrics and Gynecology of the RAMS a Scientific Conference on Robot-Assisted Operations in Gynecology was held. Professor Evgeny Kira (Moscow), Professor Samuel S. Badalian, (NY) and Professor Eduard Komlichenko (Saint-Petersburg) presented the lectures on issues of indications and counterindications to robot-assisted operations, instrumentation and preparation of the operating room were discussed on the lecture part.

On 14 October 2011 Conference “Double Antiplatelet Therapy” was held in Almazov Federal Centre with participation of the member of Working Group on Thrombosis of the European Society of Cardiology, Prof. Marco Cattaneo (Italy) who gave two lecturers on the stated issues.

On 1-2 November 2011 a symposium “Prevention of Type II Diabetes Mellitus and Cardiovascular Diseases by Changes in Nutrition and Lifestyle” was held between Almazov Federal Centre and German Institute of Human Nutrition (DIfE) within the framework of German-Russian “GERUSSFIT” project. The symposium addressed not only endocrinology and diabetology issues (obesity, unhealthy diet, nutrition questionnaires, vitamin D deficiency, influence of reproductive hormones), but also cardiology issues as well (obesity and diastolic dysfunction, prenatal starvation consequences, physical activity). Preliminary OPTIFIT research results which provided the basis for German-Russian “GERUSSFIT” project were presented on the symposium.