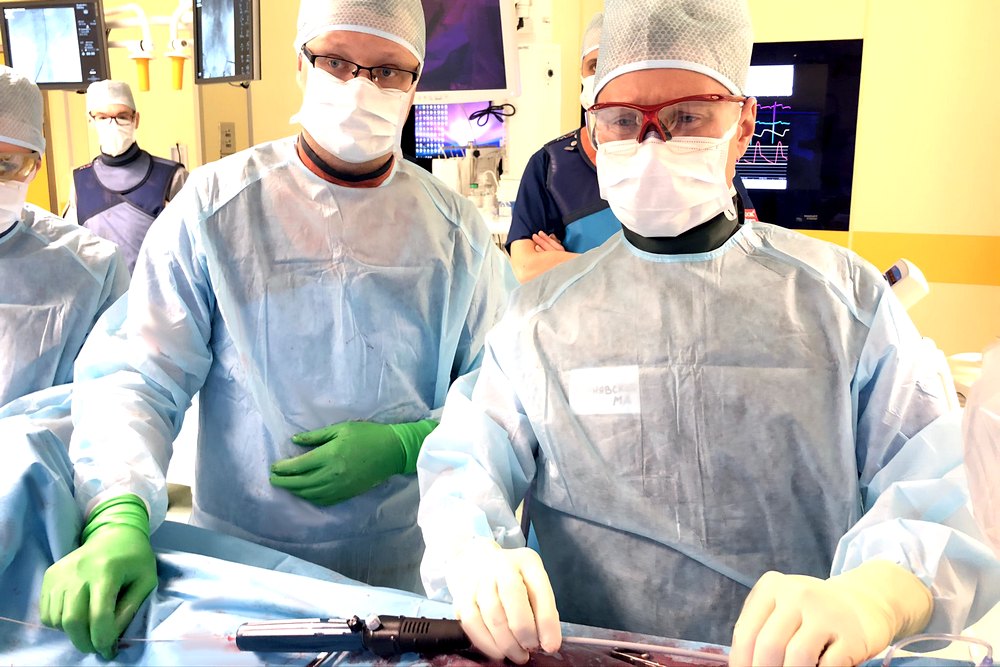 A 65-year-old man with multifocal atherosclerosis, diagnosed with juxtarenal aneurysm (the abdominal aortic aneurysm that is located right next to the renal arteries) in August 2019, with severe comorbidity and 3rd grade obesity, was admitted to the Vascular Surgery Clinic of Almazov Centre. For a long time, the patient was looking for an option of treatment, but he was denied both open and endovascular surgical repair in several clinics, not only Russian, but also foreign ones.

The case was peculiar in that the patient presented with a significant diameter of the aneurysm measuring 9.5 cm in its largest part (a normal diameter being 2 cm). The nature, shape and location of the aneurysm bending forward and to the side at an angle also suggested complexity. Due to this complexity, the traditional standard intervention was impossible.

Having discussed the results of the examination, the team of vascular surgeons headed by the Chief of the Vascular and Interventional Surgery Department Mikhail Chernyavsky opted for endovascular aortic repair using parallel grafts.

Stent graft implantation was performed in the hybrid operating room and lasted for about two hours. During this time, the surgical team was able to make five centimeter long incisions for access to the femoral vessels, catheterize the artery of the left kidney, accurately and without any margin for error position and implant two parallel stent grafts into the aorta and renal artery. As a result, endovascular repair of the abdominal aorta and left renal artery was performed under local anesthesia.

The postoperative period was uneventful. A computed angiography revealed an excellent angiographic result. The patient was discharged on the fifth day after surgery and will be regularly followed-up at Almazov Centre.

This case is unique not only because of the anatomy of the aneurysm, but also due to the comorbid status of the patient requiring the use of the most advanced techniques for minimally invasive surgery. The surgery was a success due to the expertise and firm attitude of the surgical team and the availability of high-tech equipment at Almazov Centre.