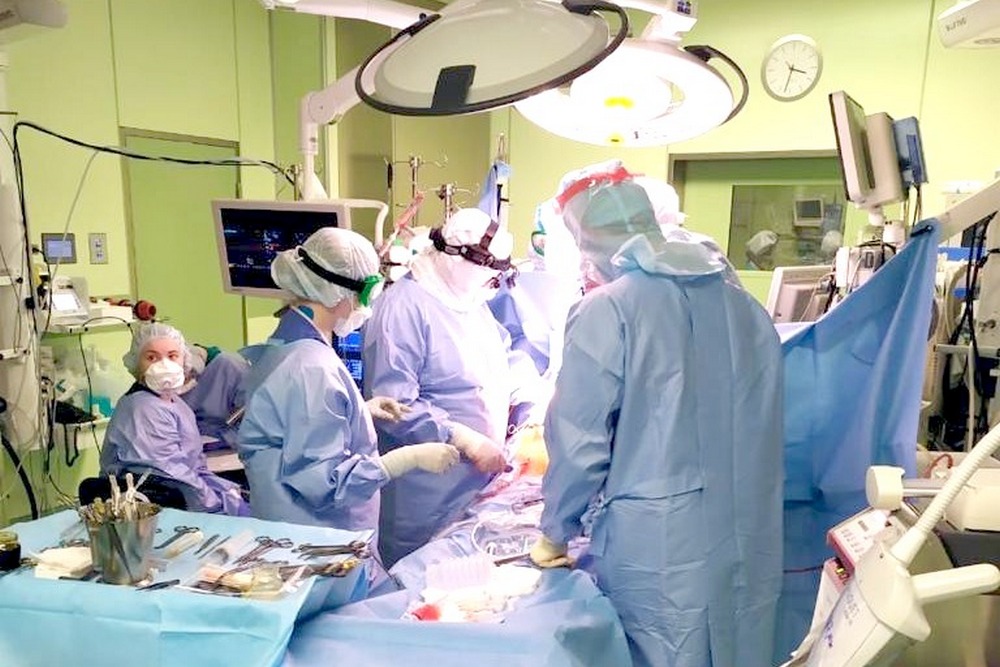 Despite the ongoing pandemic of coronavirus infection, specialists at Almazov Centre continue to provide emergency care to patients with various diseases.

A 56-year-old patient from Orenburg underwent a rare concurrent cardiac surgery – simultaneous implantation of an artificial left ventricle of the heart and aortic valve replacement. The procedure was performed by Chief Cardiac Surgeon of Almazov Centre, Honoured Doctor of the Russian Federation, Professor Mikhail Gordeev. 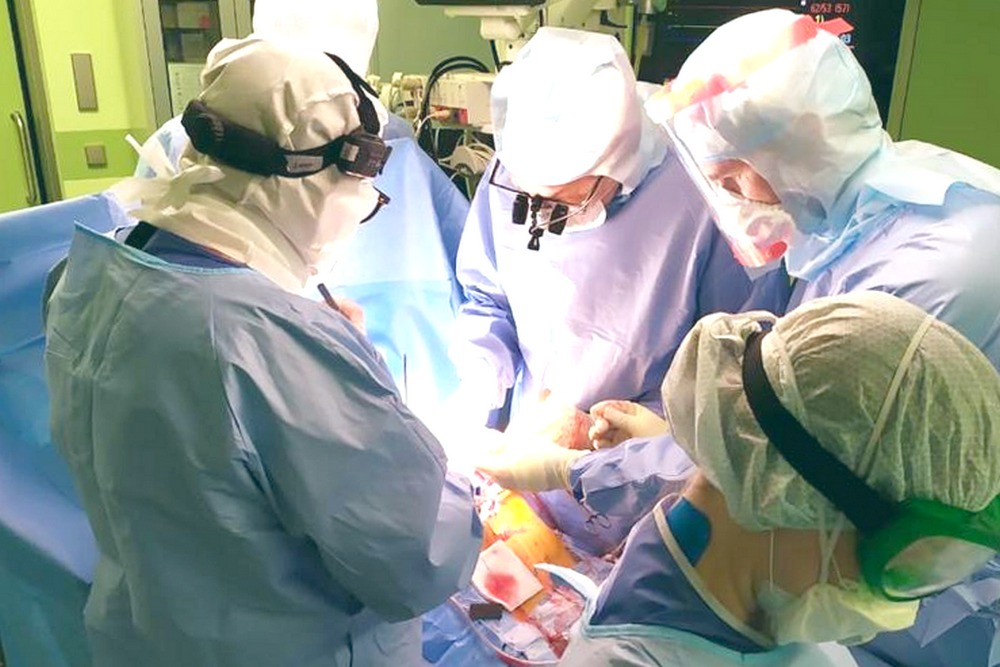 The patient began to experience heart problems about two years ago, and dilated cardiomyopathy led to progressive heart failure. In January 2020, due to a rapid deterioration in his condition, the man was admitted to the intensive care unit of a city hospital in Orenburg and was put on a combined inotropic therapy. The situation was complicated by nosocomial pneumonia. As soon as the symptoms were reversed, the doctors (in the course of a telemedicine consultation with colleagues from Almazov Centre) made a decision to transport the patient to St. Petersburg by an air ambulance.

At Almazov Centre, the man was fully examined and was prepared to put on the waiting list for heart transplantation, as by that time it had become obvious that this was the only option in this case.

However, the patient's condition deteriorated rapidly, nosocomial pneumonia came back, life-threatening ventricular arrhythmia developed – the left chambers of the heart stopped contracting properly, and blood pressure decreased. This caused the urgent need to connect the patient to an extracorporeal membrane oxygenation (ECMO) apparatus.

Although the patient’s condition was stabilized and satisfactory function of the right chambers of the heart was noted, heart transplantation was still the only option to save life. Since the length of time for a patient to be on ECMO is limited and the waiting time for a donor organ in an epidemic can be delayed, the doctors of Almazov Centre discussed the indications for implantation of an artificial left ventricle of the heart «AVK-N» (portable left ventricular assist device made in Russia). The problem was that the patient had subcompensated aortic valve insufficiency, which is a contraindication for this procedure. It was decided to simultaneously implant a ventricular assist device and perform an aortic valve replacement. The purpose of the procedure was to gain time while waiting for a donor organ. The titanium pump was implanted to pump blood from the left ventricle of the heart into the aorta. The pump is powered by wearable portable batteries that require periodic charging. The artificial aortic valve prevents blood from flowing back from the aorta to the left ventricle of the heart.

Currently, the patient remains under treatment in ICU, showing attainment of heart failure compensation. In the near future, it is planned to discuss the timing for putting on the waiting list for heart transplantation. But before that, he needs to get stronger, gain muscle mass and undergo rehabilitation, which may take at least one to two months.

The implanted artificial left ventricle «AVK-N» is a device that has been certified as a bridge to transplantation and not as a replacement therapy for long-term support. Therefore, the heart transplant is supposed to be performed within a year. At the same time, the latest generation of implantable pumps allows testing the functions of heart ventricles for a long time.