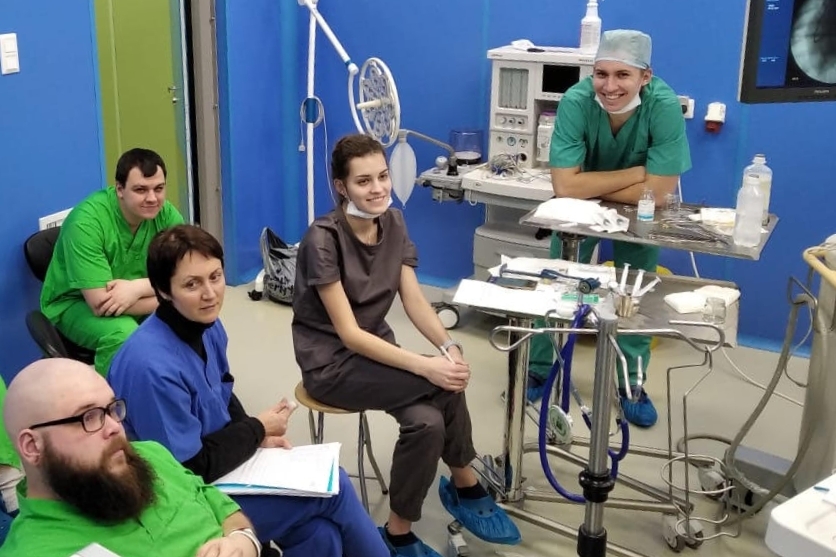 A team of scientists at Almazov Centre proposed a new approach to treat cardiovascular disease – laser catheter denervation of the renal arteries.

Renal artery denervation, or renal sympathetic nerve ablation, is a minimally invasive method. Experimental and clinical studies have shown a positive effect of renal denervation in the treatment of arterial hypertension, ventricular arrhythmias and atrial fibrillation. The impact on the cardiovascular system is associated with a change in sympathetic nervous activity, since a large number of sympathetic nerve endings are located around the renal arteries, and their excessive activation is involved in the pathogenesis of diseases. Today, scientists continue to study renal denervation in other conditions, including heart failure and diabetes mellitus. This approach is not yet included in the clinical guidelines, however, denervation techniques are being increasingly studied and improved globally.

Specialists of the Institute of Heart and Vessels (Neuromodulation Research Laboratory, Arrhythmology Research Department) at Almazov Centre suggested using laser ablation for renal denervation, since the endothelium is virtually “transparent” to radiation at a wavelength of 1064 nm (there is no thermal damage to the endothelium), the temperature gradient is formed at a greater tissue depth, allowing for the effect of denervation.

A series of experimental procedures were performed at the Preclinical and Translational Research Centre to study the effectiveness and safety of using laser energy for renal artery denervation in comparison with radiofrequency ablation as standard and most common approach. In radiofrequency ablation, thermal tissue damage occurs when the tissue is heated to 50 °C or more. However, this method has a number of well-known limitations, the main being the heterogeneity of the damage depth, severe injury to the endothelial layer of the arteries and less destruction of target, deeper structures, including perivascular nerves. In order to reduce complications and increase the procedural efficiency, more effective and safer methods of ablation are being sought.

Currently, researchers at the Neuromodulation Research Laboratory continue advanced developments in the field of renal denervation. A model for the induction of reversible arterial hypertension using angiotensin II is being created to assess the hemodynamic effects of denervation. Today, there are no reliable methods for assessing the degree and sufficiency of renal denervation to obtain reproducible results of lowering blood pressure, thus the proposed assessment method may be a priority.

Another significant advance in the field of laser ablation is the development of a real-time tissue damage monitoring system. Together with scientists and engineers of Ustinov Baltic State Technical University, an approach and an operating model of the damage control device were created. The integration of such a device into catheter ablation systems creates a qualitatively new control of ablation (including laser ablation) and makes it possible to prevent possible complications of thermal exposure. As of today, this system has no counterparts.

The results will be presented in the following materials: